Attention all Goetta devotees–Goetta Fest is rapidly approaching and will be in full swing from August 2-5 along the riverfront at Newport On The Levee.  If you’re not from this area or haven’t visited much, then you probably aren’t familiar with the pork-based food.  I’m not going to pretend to know much about it other than it’s a combination of pork, steel-cut/pin oats and spices–and I may not even be correct about that.  Not being native to the Cincinnati area, I had never tried it and the description of it just didn’t appeal to me.  We don’t have it on our menu here….as I’m not sure how many Goetta fans there really are, but I did have a customer make it for me one morning.  I was pleasantly surprised that it was ok and liked the appeal of the crunch as it was fried up nice and crispy.  Apparently there are several ways of preparing it and that will be shown in full force this coming weekend.

Goetta Fest at Newport on the Levee

At Goetta Fest, it’s not just a case of turning it into a cheeseburger or placing it on top of pizza.  The participating chefs/restaurants/businesses get down right creative in their offerings turning this sausage product into dessert as well.  Some of the many savory offerings available for purchase and made with Goetta include:  Burritos, Fried Rice, Mac N Cheese, tater tots, tamales, cheese fries, philly cheesesteak and reuben sandwiches.  Look for “desserts” to include the likes of brownies, cheesecake, funnel cakes and donut sandwiches to name a few. 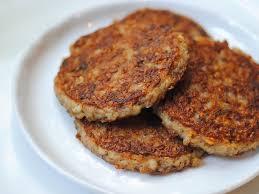 But, this festival is not just about the food.  There is a huge line up of bands (19 to be exact) performing on two different stages–the Top Golf Stage and the Goetta Stage.  As the event starts Thursday night, so does the entertainment which continues throughout the day and evening up through the end of the festival on Sunday night.

So bring your appetite, your dancing shoes and your wallet.  The festivities start on Thursday, August 2 at 5 pm and go until 10 pm on Sunday, August 5.  There’s no entry to get in and no fees for the entertainment.  Food prices range from $4-$7 per item.  We have a few rooms still available for Thursday and Sunday so if you’re coming this way and going to Goetta Fest, mention this article and we’ll give you 10% off your room rates.